We were called to discuss a worrying noise. The home in Leasowe had become home to a colony of Honey bees. The buzzing and scratching noises were coming from the corner of one of the children’s bedrooms, behind the air vent which had been wallpapered over.

After a survey we had to make arrangements to clear the bedroom and take off the air vent cover from inside. As we removed the cover around 5000 honey bees and about 6 frames of honey comb were present. We used a method called the Bee vac and cut away the comb from the wall. The bees were all safe and relocated back to our apiary where they will start their new home

We left the family happy and re assured. The bee problem had been solved and the house was free of the insect invasion.

Honey Bees Nest in Soffits of a 3 Story House

We were called out by the owner of a home in Manchester. She had noticed bees flying around her roof next to her bathroom window. Concerned for her safety she called us to remove the unwanted bees. After a site survey we confirmed that a swarm of honey bees had made a nest in the soffits of her home. We arranged for scaffolding to be erected for a safe inspection of what was happening up there.

After taking down the soffits a very large number, around 10,000 bees were disturbed. Bees will defend their territory if hungry so it was important to remove the hive with the comb and bees as quickly as possible before the ‘girls’ get agitated.

We never use harmful chemicals, we believe in saving the bees and relocating them back to our apiary.

Today the family’s bee problem has been solved and the house is free of insect invaders.

Swarm of Bees Nest in a Tree at Liverpool Cathedral

Bee hive removal service was called out to a swarm of bees that had swarmed in a tree and was building a home in the grounds of Liverpool Cathedral.

For this particular job, because of the height, we had to use scaffolding for access. We are certified bee keepers but have a background in demolition and civil engineering. All these skills help . Even so the bees did not want to be moved and became very aggressive and stinging.

Due to the wet summer they were starving and needed food, nectar or sugar syrup.

We managed to get the swarm with the Queen bee and relocate them to their new home in our apiary. Another day another swarm saved. 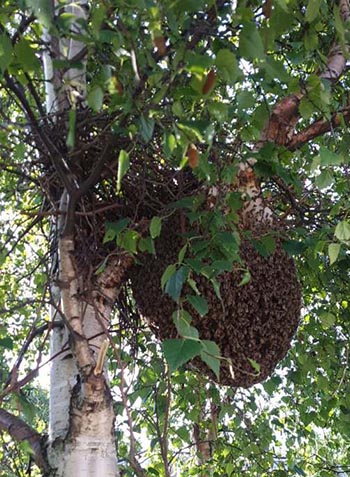 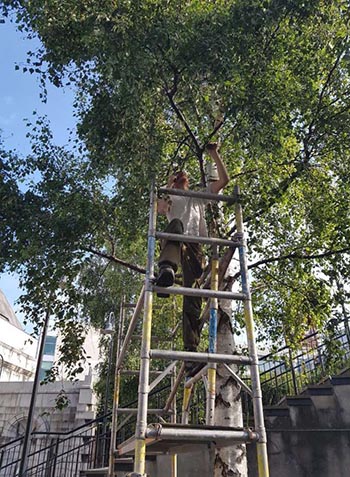 Beehive in Brickworks in St Helens

Bee hive removal services was called out by a young mum who was worried by a swarm of bees coming and going from a nearby empty property. The bee removal was required in the house which formed part of a row of terrace houses where the bees had swarmed.

The bee hive removal service was required by the Council.

This bee removal job required the 6 courses of bricks to be removed from inside the property.

We are trained demolition experts as well as bee hive removal specialists so we were very capable of dealing with this particular honey bee removal task. We had to remove the comb and the bees , vac out all the bees safely and relocate them.

We remove all the comb possible , fill in the gaps in thebrick work with cement and brick back up the hole. This job of bee removal took over three days. Another satisfied client and happy honey bees. 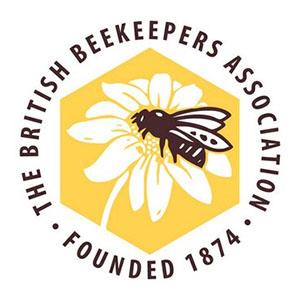 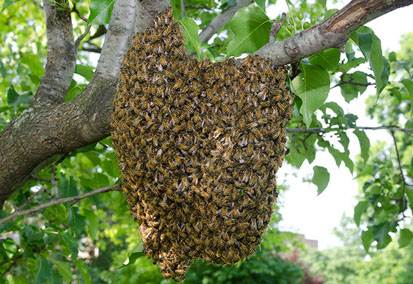